Seven months ago my life was a mess. I was selling furniture, giving away stuff, sorting through papers and clothes, all in preparation to move across the world. I slept in a half furnished room, in a nearly empty apartment.

At the time, I was dismantling the life I had built, rolling it up into the largest suitcase I could find and preparing emotionally for the next thing in my life. I was fully prepared—as much as I could be—but looking back, I really had no idea of all that would come.

It has now been six months since moving to Indonesia and I feel I should analyze what in bahasa Indonesia is known as suasana hati or mood, which also directly translates into “atmosphere of the heart.”

What is the atmosphere of my heart?

Mostly, I can’t believe it has already been 6 months. Time is going by incredibly fast, yet I still know so little about Indonesia. It wasn’t even until a few months ago that I was introduced to es buah—my favorite Indonesian food—which I probably never would have tasted had I just been here as a tourist for a couple of weeks.

Going forward, it will be ridiculous for me to think that visiting places for days or a couple weeks at a time will give me any real idea of what a place is like. Perhaps I’ll get a superficial essence, but nothing of what it’s really like culturally, especially without the ability to speak to people in their native language. This is a very sad realization. I’d like to know many places the way I’m getting to know Indonesia.

About Living With A Host Family

It’s hard to go from being an independent adult to having to answer to a mother or father that aren’t even your own, but mostly I am happy that people are kind enough to accept me—a foreign stranger—as a member of their family.

Their affection goes beyond acceptance; it is much closer to love. On my return to my host family’s house after 10 days in Surabaya I came home to es buah waiting for me in the fridge—if that’s not love, I don’t know what is.

About Living in An Islamic Community

Living in an Islamic country is interesting. I am learning about a lot about their customs and religious beliefs. What’s most surprising to me is how inseparable religion is from daily life. As a Catholic, I can go days and days without thinking about many aspects of my religion. Most Muslims are always living theirs.

As I get to know more and more Muslims, I notice how much angrier I get at media demonizing Islam. During my time here, I’ve watched several American movies and TV shows in which they use derogative terms or phrases referencing Islamic people in an effort to be funny or witty and it pisses me off. Muslims have been my family for 6 months now and I have become extremely protective of them.

Teaching English is difficult. I love teaching in general and I love my students—they are the ones that keep me doing this—but teaching English in Indonesia is not an easy task. The government curriculum is difficult to interpret and navigate. The students are expected to reach an impossibly high level of fluency, when the actual level and retention of most students is extremely low. The English teachers’ level is, at times, also low and teaching is still a brand new experience for me.

This, combined with a radically different school environment from anything I’ve ever experienced—students come in late, they never change classrooms, they take more than 15 subjects, they tend to collaborate in all of their work (i.e. cheating), they have breaks for prayers several times a day in a 7 hour school day—has been my biggest challenge and I’m still working on adjusting everyday.

About Being a PCV

I had a lot of doubts on whether joining the Peace Corps would be the right move for me. Before accepting my invitation, I thought about it very carefully weighing my options and considering every alternative. When I first got here, that thought process continued and I had moments in which I felt I had made the wrong choice.

Now, six months later, I am happy to say that it has been the best decision I could have made. It’s difficult and challenging, yet also rewarding. I am happy and proud to be a part of this unique organization.

As a bonus I have met incredible people—both Indonesians and other Peace Corps volunteers and staff—all whom I would have never met otherwise. The only sad part about it is that I barely get to spend time with most of them, and our time here goes fast.

About Being Away from Home

In spite of the previous idea, being away from home is so hard. The older I get, the less I like it. I am happy to be in Indonesia, but it is frustrating that you must give up a lot in order to partake in this experience.

Fortunately for me, we live in a time in which communication technology exists because—I’ll be real—I could not do the romanticized idea of the Peace Corps, in which you’re in complete isolation without technology. Here I have email, text messaging and/or the occasional video chat.

I get a lot of crap for having an iPhone in the Peace Corps, but it’s a huge comfort to me that my family and friends across the world are only an iMessage away. To incoming PCVs that are close to their families and friends: I highly suggest you all invest in iPhones.

This is an area in which my suasana hati is complex. I look around my environment and it is mostly unfamiliar. At first this was exciting, and in many ways it still is, but sometimes I wonder: what makes a person, is it their personality or is it their environment?

The environment is so different in Indonesia that sometimes I have moments in which I mentally reconstruct my former one – the music, the makeup, the clothing, the activities, the people— I hug them in my mind attempting to retain pieces of my old self. I don’t feel like I’m changing radically, but I also feel like it’s an inevitability. I really liked who I used to be; hopefully this will only change me for the better.

During training, I visited a volunteer who kept talking about how she likes to do things at site that make her feel like “a real person.” At the time, I thought it was a funny expression. I’m always a real person, I thought, but I am starting to see that at site you are an alternate version of yourself—the version that has limited activities and changes their behavior in exchange for cultural integration. I get it now. It’s the small things. Eating cereal and yogurt, listening to Latin music, DJ-ing dance parties during in-service training, going to the movies, having extensive conversations or just joking around in English– those are all things make me feel like a “real person” and though I love being in Indonesia, it’s clear to me how much of myself I’ve given up to be here. 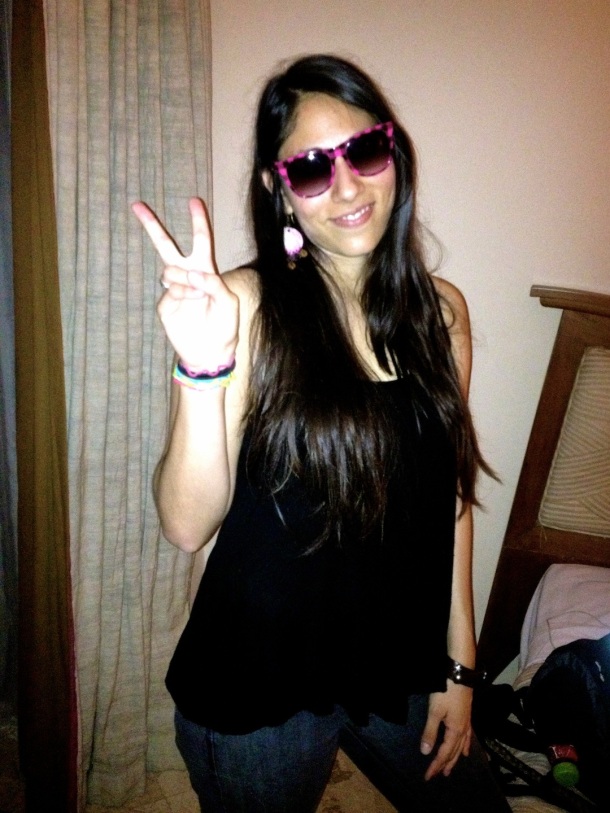 Me feeling like a “real person” by dressing up as a K-Pop star at our IST 2012 Halloween Party.

Yet, I’m still 100% committed to serving in Indonesia and I am happy that most of the people that came over to become Peace Corps volunteers with me—also known as ID6—are still going strong too. 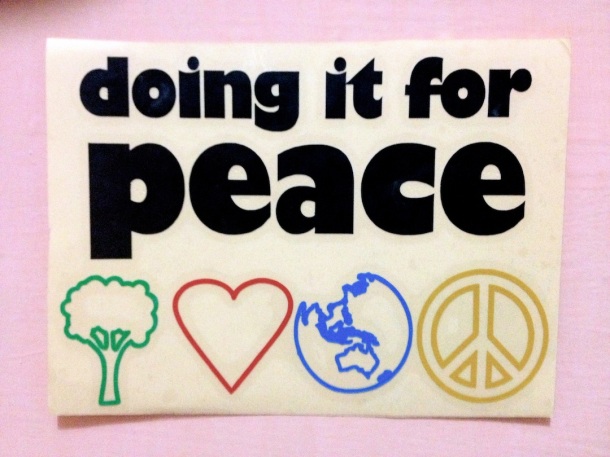 Thanks Em for introducing the perfect phrase for getting through all kinds of difficult, strange and different things we encounter in the Peace Corps and thanks Fer for designing this sticker. Here’s to 20 more months of doing all kinds of crazy things for peace!